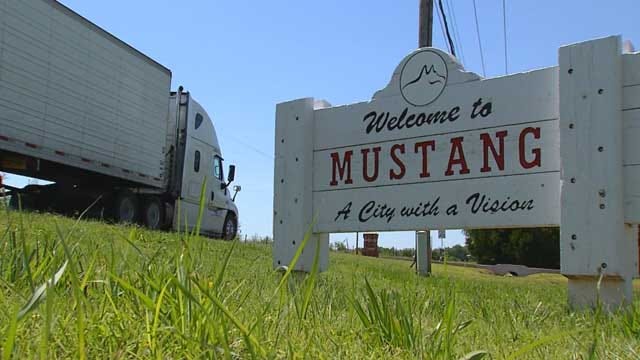 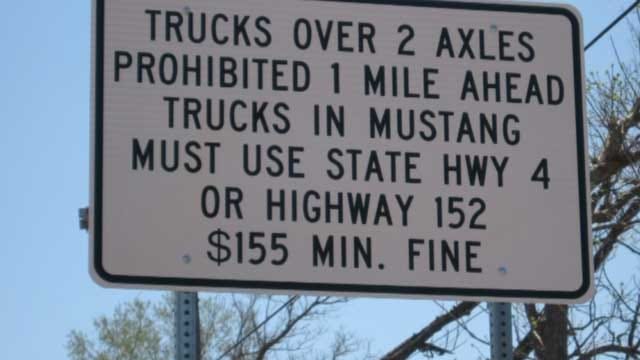 A city's plan to protect its roads gets derailed by another city. The City of Mustang put up signs to stop big trucks from traveling their streets, but the signs were put in OKC limits, so the City of Oklahoma City removed them.

"With the growth of Canadian County right now, trucks are coming in from everywhere, like from the oilfield and from construction. Canadian County is the 39th fastest growing county in the U.S.," said Mustang mayor, Jay Adams.

"Trying to make sure that our streets last as long as they can possibly last," Adams said.

Adams says studies show one 80,000-pound truck has the same impact to a piece of asphalt as 5,000 cars. Streets like 89th are being repaired now from truck damage.

"Basically from Morgan Road all the way to Mustang Road was a very heavily traveled trucking route," Adams said. "Most of our secondary roads, like Sara road in the city, actually are just simple, narrow, 2-lane asphalt roads. So heavy trucks do take quite a toll on those little roads."

In response, the Mustang Police Department, Traffic Commission and City Council worked to put up about 10 signs that read: "Trucks over two axles are prohibited one mile ahead in Mustang, Must use State Highway 4 or Highway 152. $155 minimum fine."

Oklahoma City resident Patrick Reynolds thought the signs were a great idea to address safety concerns when huge trucks get too close to the nearby schools, so he wrote Oklahoma City a letter.

"I thought they were Oklahoma City's signs, and I was making an effort to tell them it would be better to go start at southeast 15th, rather than down where the signs were on 44th, Reynolds said.

But his concern backfired.

"They didn't know about the signs. So they went out and pulled them up," Reynolds said.

Oklahoma City took every single sign in the city limits. It's a road block the City of Mustang hopes to resolve soon.

"Unfortunately there wasn't good city-to-city communication about the decision," Adams said. "We're all traveling on the same roads, so it's just our way of trying to say if we can focus our traveling onto the state highways that are built and designed to handle those larger trucks, it would be so much better for us in the long run."

The City of Mustang is only 12 square miles and Adams says it can take a whole year's budget just to repair one stretch of road.

Mustang is now in talks with Oklahoma City engineers and its traffic division. Officials will have to go through an application process in order to get approval from OKC to put up the signs.