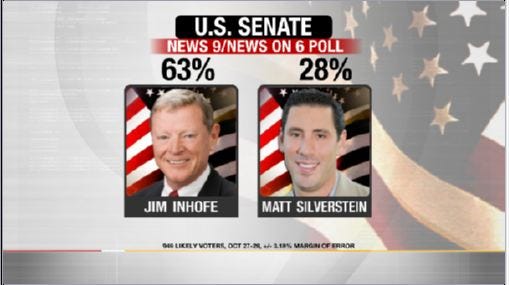 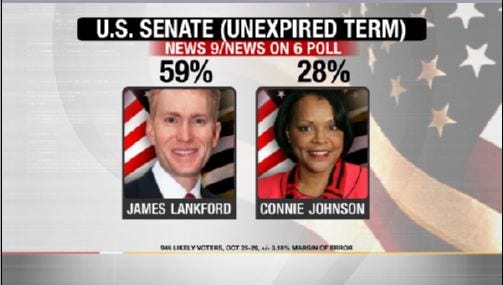 According to our exclusive poll, Jim Inhofe has 63 percent of the state's support right now while Democratic challenger Matt Silverstein has 28 percent. Four percent of voters are still undecided.

In the race to fill Senator Tom Coburn's seat, who is retiring, Republican James Lankford is leading with 59 percent over Democrat Connie Johnson who has 28 percent. Nine percent of voters are undecided.

“Democrats have a tough time there competing because they are weighted down by the National Party and how left it leans and with Barack Obama,” said Bill Shapard, CEO of SoonerPoll.com. “He's had a lot of trouble here since his re-election in the last two years so Oklahomans are ready to continue to send Republicans back to Washington.”

Get complete elections results on News 9, www.News9.com or any of the News 9 mobile apps.

The survey of 949 likely voters was conducted Oct. 25-29 by SoonerPoll.com, using a dual frame of both cell phones and land lines. The poll has a margin of error of +/- 3.18 percentage points. Results are weighted by age and party, stratified to Oklahoma likely voter demographics.