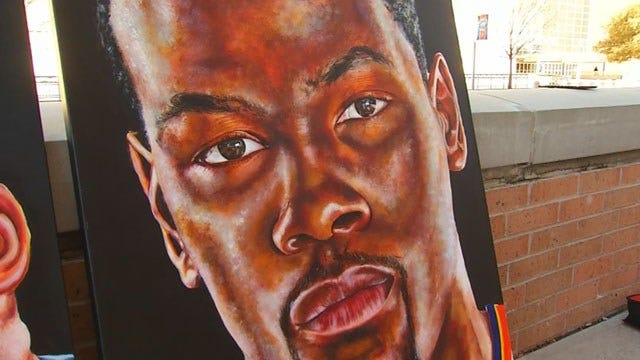 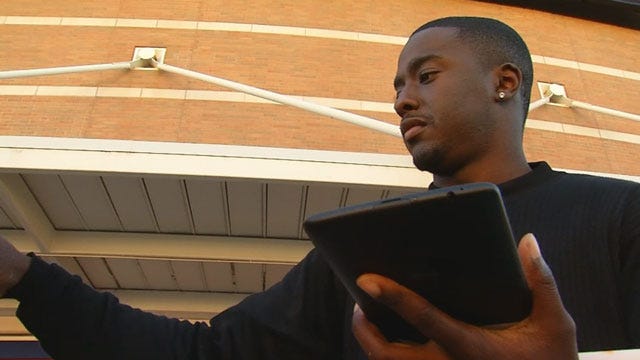 Kevin Durant and the Thunder have earned legions of loyal and fervent fans, not only here at home, but anywhere that people follow the NBA. Of late, one of those fans has found a way to stand out from the rest.

Freddie Simpkins has never been to a Thunder game, and he's not from Oklahoma City. And yet he is currently camped out, not far from the Chesapeake Arena, pursuing his own NBA dream.

Simpkins is taking a long shot at meeting, and perhaps even getting to know the players on his favorite team.

"I knew it wasn't going to be easy," Simpkins admitted, "but trying to capture a dream never is easy."

Simpkins is an artist and a minimalist.

"I started painting when I was real young," Simpkins explained, "probably since I could pick up a paint brush."

Give him a little bit of space outdoors, canvas, paint and a brush, and he has all he needs to create a masterpiece as colorful as he is.

"I like to dab my brush and I keep building layers," the young artist noted. "[They have] many colors that the eye is sometimes blind to."

Simpkins has an eye for detail, and not just in his paintings. He appreciates art in any form -- especially art that bears the number 35.

In fact, he's such a big fan, he decided to bring his makeshift art studio from Virginia Beach to the sidewalks encircling the Thunderdome.

"I will have every Thunder player painted," Simpkins said, "and if it is still not to where I want it to be, I will start on the coaches and assistant coaches and then I will move on to the mascot."

Simpkins says he'll even start painting the fans if that's what it takes to get a Thunder backstage pass. He's hoping his artwork will stand out and give him a chance to fulfill his dream of meeting Kevin Durant.

"Awe, man, he is just amazing!" said Simpkins. "I was so happy when he won the MVP [last season] because I feel like he still doesn't get all the credit he deserves."

"How the world knew of Michelangelo, hopefully they will know of Freddie Simpkins," he laughed. "That's the way I look at it, so that's the way I just keep going with it."

Simpkins says his paintings are for sale, at prices that he says are reasonable. He hoped KD will autograph a portrait, though, which would make it more valuable.

Simpkins has been living out of his car for two months trying to reach his goal and doesn't plan on giving up.