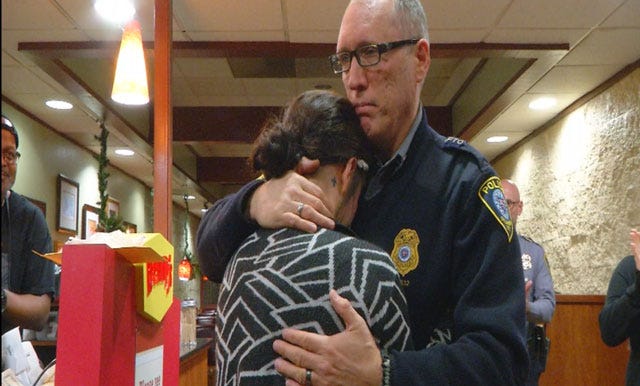 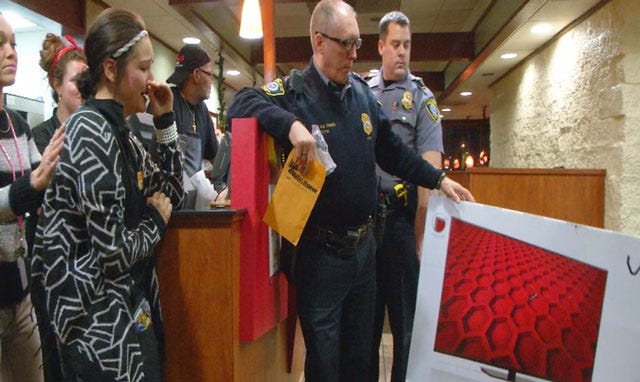 Oklahoma City police stormed into a Denny's restaurant Tuesday night and surprised a waitress who was recently the target of thieves.

Earlier this week, a burglar broke into Debra Enos' home and got away with all the Christmas gifts she purchased for her 3-year-old son. To add insult to injury, they toppled the tree and snatched a couple of big screen televisions.

Oklahoma City Police Sgt. Casey Owens responded Enos' call for help and decided to take up a collection from fellow officers and dispatchers to try and replace some of the gifts for the child.

The goal was to raise a couple hundred dollars. But officers exceeded that goal and surprised Enos during her late night shift at a local Denny's restaurant.

The officers and dispatchers were able to collect cash, several gift cards, a new big screen television and burglar bars for the single mother's home.

Enos broke down in tears and hugged Sgt. Owens and thanked the dozen or so officers who presented her with the gifts in the restaurant.

“She needed a break. Especially during the Christmas time,” said Sgt. Owens.

Enos said the generosity helps because she was planning to work double shifts for the rest of the week to recover what was taken.

Police said they wish they could do this for everyone, but it was nice to see so many of their colleagues come together to make sure Enos and her son had a Christmas to remember.