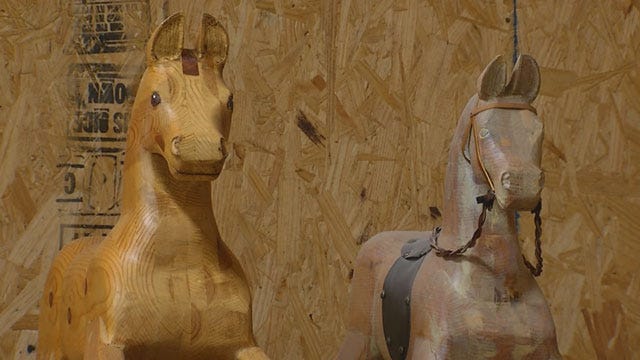 An Edmond woodworker attributed her success to meticulous craftsmanship and good fortune.

This past summer, her creation proved worthy of royalty, but her wild ride has started again.

Jackie Wilson built her first wooden rocking horse for her daughter 34 years ago.

“I think I was born with a love of horses,” said Wilson.

Wilson said the horses are high-end, with the largest one going for more than $2,000.

Wilson said she was told that part of the duties of the State Department meant finding gifts that could be given to dignitaries.

Wilson decided to donate one of her horses and was told to not tell anyone about who called.

She was also never told who might be receiving one of her rocking horses.

This past summer, Wilson's donation ended up on display at Buckingham Palace featuring 250 years of royal childhood memorabilia and gifts.

That's when who took the reins of the rocker was revealed.

Turns out, the horse was a gift from the Obamas to Prince George.

Wilson's story was just featured in Guidepost Magazine and the phone has been ringing with new orders.

More rockers were rolling out, but just as special to Wilson were all the messages she got from Guidepost readers.

The emails and letters were another reward on the woodworker's royal ride.

“When it touches other people's lives, it's encouraging. It's very uplifting,” added Wilson.

If you have a story to tell, we'd love to hear about it. Just go to our Red Dirt Diaries page and fill out the form.