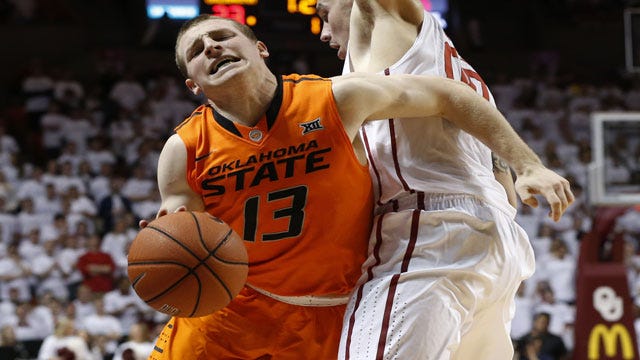 If you missed Bedlam on Saturday, here's a recap: Buddy Hield hit every shot he took, and the Cowboys laid enough bricks to build another practice facility.

It was a tough day for Oklahoma State, but the road ahead could be even tougher.

Gone is Marcus Smart. Gone is Markel Brown. And as the Pokes rebuild, the current talent level in Stillwater simply isn't high enough to overcome a poor shooting night against a decent opponent.

Le'Bryan Nash and Phil Forte are very good players. Nash might even make it to the NBA. But outside of those two guys, Oklahoma State just doesn't have anyone it can count on to produce.

Coach Travis Ford did well to find LSU transfer Anthony Hickey, who has been a solid addition. Hickey's ability to run point has been crucial after the unexpected dismissal of Stevie Clark last season. But while Hickey has stabilized the offense, you just never know what he's gonna give you. Hickey has three games this season with 15 or more points, but seven games with five or fewer points.

Michael Cobbins is a solid post defender, but he's not a scoring threat. Leyton Hammonds scored 15 points on Saturday, but averages just a shade more than two per game. Jeff Newberry is usually good for about 5-to-8 points a night, but was held scoreless on Saturday.

Oklahoma State's firepower simply must start with Nash and Forte, and on Saturday, it didn't. If OSU gets those two guys going, it opens up shots for the support players. Forte shot 0-of-5 from deep against the Sooners and Nash shot just 6-of-15 from the floor and turned it over five times. Without their production, the Cowboys stand little chance against a legit opponent like Oklahoma.

Oklahoma State is just 1-4 against Power-Five opponents when Phil Forte scores fewer than 20 points. The Cowboys are also 2-4 against the Power Five when Nash fails to score 20. It's no coincidence; either those two carry the team or the Pokes are likely to lose.

The Sooners did a great job on Saturday of swarming OSU's dynamic duo and forcing them to give up the ball. OU was clearly fine with Hickey, Hammonds, Newberry, Tavarius Shine and the rest of the Cowboys hoisting tough shots. The blueprint to beat the Pokes is now out.

It's safe to say that the 24th-ranked Cowboys (12-5, 2-3) have overachieved a bit to this point, but reality is calling. OSU is 1-3 against ranked foes and could potentially face eight more in their next 10 games.

As Ford spends this season refilling Oklahoma State's talent pool, we're about to find out if this Cowboy team will sink or swim.