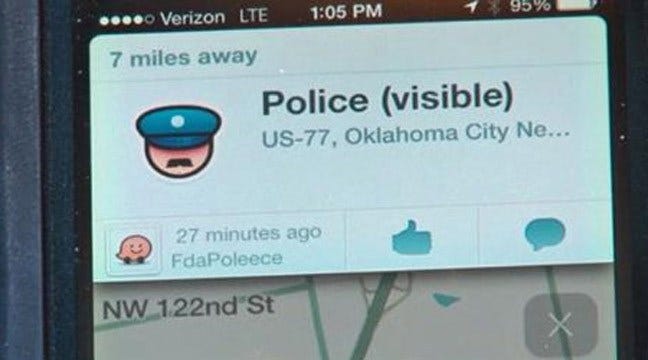 Officers across the country are concerned the app could put their lives in danger.

Recent events, such as the premeditated murder of two New York City police officers, show that there are some people who would use the app, not to avoid police, but to target them.

In Oklahoma, police acknowledge social media is changing their job.

"Now everything is instant. If someone posts videos, something, it's up there for everyone to see," said John George, president of the Oklahoma City Fraternal Order of Police.

The app is pretty simple to use. When an officer is spotted on the road, users can hit the police icon, select visible or hidden, and then send it to the map for everyone to see.

There are no known direct connections between the Waze app and any attack on police. Still some officers believe it's only a matter of time.

George is taking a different view.

“It could give people an idea of where the officers are at, but our officers don't just sit at a post 8 or 10 hours a day," he said.

George said officers are constantly on patrol during their shifts, making it difficult for anyone to pinpoint their location.

"If they are reporting it on social media or whatever, I don't see the harm again, unless they are posting threats or doing something like that," he said.

Still, officers around the country are calling on Google to remove the police-tracking portion of the app.