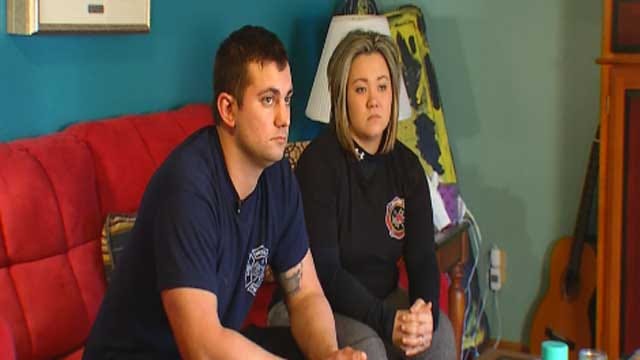 City Manager Taylor fired Hankins and Spaid while they walked out of the meeting.

They walked out because Taylor refused to reschedule the meeting, so Hankins and Spaid could have an attorney present.

Hankins recorded the short meeting with her cellphone.

News 9 listened to the recording several times. Before he fired the firefighters, Taylor, who said he's a retired Army Colonel and Chaplain of 29 years made a statement.

He said, “The mayor does not run this city. Whoever made that phone call. The city manager runs this city. The mayor is not here and the mayor will not be here, because I told him he will not be here period. This is not his to handle. And he agreed with me. And by the way, that's going behind my back, and I won't tolerate that. ”

News 9's Steve Shaw met with the fired firefighters Thursday afternoon in Oklahoma City. They are lawyering up, and said they will have plenty to tell News 9 soon.

So News 9's Steve Shaw rode over to McLoud City Hall with News 9 Photographer Cody McDonell, who recorded a few exchanges on camera, he had with the city manager.

He said, “The purpose of the meeting was to discuss issues they had. Very serious issues which I am working on right here”.

Shaw replied, “You did the discussing. They weren't able to get a word in edge-wise”.

Taylor said, “They left the meeting before we got the chief in”.

Shaw replied, “And you fired them because they wanted to get an attorney”.

In Oklahoma, only one party needs to be aware a conversation is being taped. News 9 will continue to follow this situation.