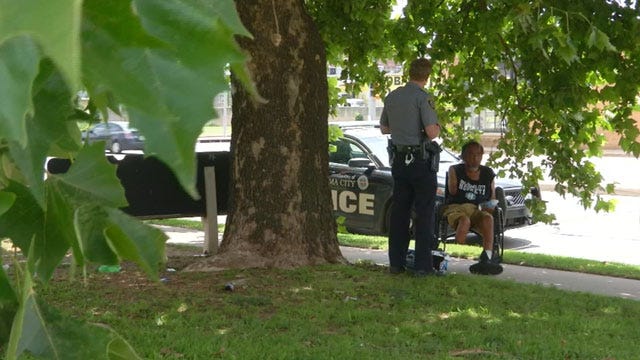 The past few years, police and the city of Oklahoma City have been on a mission to help the homeless. But now, we get to meet the men and women on the front lines of this effort.

Each day, Oklahoma City Police Department (OCPD) officers personally make it their mission to help the homeless and mentally ill people they encounter on the streets in any way they can.

Whether it's buying a meal, buying them some clothes or finding a place that will take them in.

Sherrica Buckingham is one of several Oklahoma City police officers who have taken steps to help the less fortunate. She has even gone above and beyond by reaching into her own pocket at times to help while patrolling the city. She clearly remembers one homeless woman she couldn't help but made a personal connection and wanted to help in any way she could.

"As soon as I got out of the car she said 'Hey,'” said Sherrica Buckingham, an Oklahoma City police officer. "She lit up. She said 'Hey I remember you.'"

Many on the department's crisis intervention team experience the exact same thing. Sgt. Corey Nooner with OCPD is in charge of the Crisis Intervention Team (CIT) unit, which was started 12 years ago to help with the encounters between police and the mentally ill community. One such encounter is with Milton Levi Jr., also known as Milton Oldcrow, also known as Otis by the Oklahoma City police officers who know him. He is missing part of his right arm, part of his right leg and is blind in his right eye. Most of the time, he refuses any help.

"Our officers are having to respond to calls for service where somebody is out of control somebody with mental health problems isn't necessarily committing a crime," said Chief Bill Citty, Oklahoma City police. "But we're the ones that get called and so we have to deal with it."

According to jail records, police have made contact with Morton more than 190 times, mostly for public drunk, spitting on city employees and throwing objects at moving vehicles. He has been arrested more than 80 times since the year 2000, and each time it happens, it ends up costing us money.

"They're in a position where you can't walk away from them there, they have to be placed somewhere," Citty said.

Citty said it costs hundreds of thousands of dollars to deal with all the mental health calls they get. Morton is mentally ill, indigent and unable to work, so it doesn't cost him a dime. He's already been kicked out of homeless shelters and worn out his welcome with his own tribe. And with hospitals and clinics statewide reducing their bed space for mental health calls, there are few other places to turn.

What most people don't know is that officers have reached into their own pockets to pay for clothes and food and even a bus ticket for Morton, only to have him return to the streets. Sgt. Corey Nooner is with Oklahoma City's Crisis Intervention Team, which was started 12 years ago to help with cases just like this.

"It gets frustrating in the beginning you know trying to make all the phone calls and everything but it's pretty rewarding at the end of it when you find out that they've been placed that they've found somebody they can depend on," said Corey Nooner with the OCPD. "It's not to say we don't see these people again, but at least for the moment they are in a stable environment, they are in a safe place and they can get access to the services they need."

Chief Citty said 90 percent of people who have mental health issues are not violent people. They try to teach their officers how to respond accordingly, he added.

"Mental health is a disease of the brain and it's very important for us to understand that and teach our officers how to deal with that because there is a specific way to deal with that," said Chief Citty.

Chief Citty said if the city and state would spend the dollars on the front end for mental health treatment, it could end up saving the city taxpayers a lot of money in the long run.

"We're not going to leave these people out there just to fend for themselves that's what we are here for," said Sgt. Nooner. "We'll find a solution eventually."

As for Morton, he's currently behind bars in the Oklahoma County Jail, after being locked up back in October. In all, Morton has cost the city and ultimately taxpayers close to $70,000.

Right now, the Oklahoma City Police Department has 120 officers assigned to the CIT unit, and has several more officers waiting to get trained for the program.

Learn more about volunteering to help the homeless.