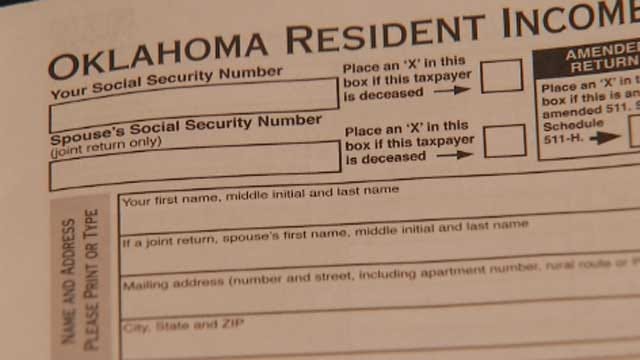 Midwest City Police are dealing with a tax scam that victims don't realize is happening until it is too late.

Detectives said they have seen several cases where scammers are somehow filing tax returns for other people and claiming the refund money for themselves.

This is one of several tax season scams going around, but in these cases the victims didn't do anything wrong and they were still targeted.

Tax season can mean big refunds, but it has meant big setbacks for some Oklahomans.

“It can be a nightmare for people,” said Asst. Chief Sid Porter.

“They couldn't believe it was happening, you don't know who has your information and you start wondering ‘who is it, who got my information, how did they get it?',” Asst. Chief Porter explained.

The victims found out when the IRS or Oklahoma Tax Commission notified them, asking for additional information or saying there was a problem with their 2014 tax return.

None of the victims had filed their returns yet.

“People are stealing people's identities and not only are they using their credit cards and information, they're actually filing a tax return under that social security number,” said Paula Ross with the Oklahoma Tax Commission.

Scammers somehow got the victim's social security number, then dummied up the rest of a W-2 form.

“We haven't probably had as big a problem in Oklahoma as they've had across the nation,” Ross told News 9.

In some instances, the scammers actually got the victim's refund.

“It's barely into February and most people don't get everything to even file taxes until February, so these people have jumped on it early,” added Porter.

If this happens to you, everything will eventually be sorted out and you'll get your refund money, but it is a lengthy process.

If you receive a letter from the OTC, police recommend calling OTC at (800) 522-8165 for verification and for you to file a police report for identity theft.