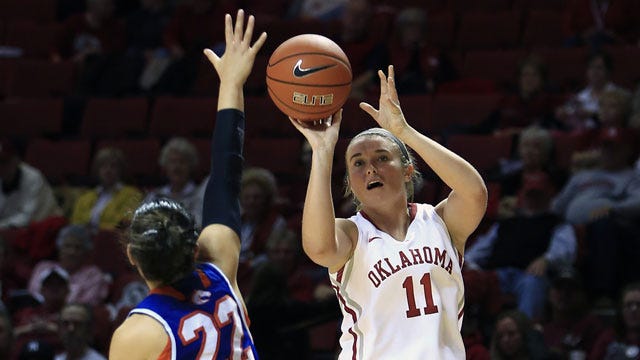 The Oklahoma women's basketball team cruised to a 77-54 win over TCU in its annual Play4Kay game on Saturday afternoon inside Lloyd Noble Center.

Fans were encouraged to wear pink, and players from both teams donned pink uniforms or headbands in support of friends and family members who are cancer victims or survivors.

Eleven Sooners scored in the contest, led by a 21-point performance by Peyton Little. The redshirt sophomore was 8-of-15 from the field and recorded five 3-pointers. Redshirt junior Kaylon Williams logged her fourth double-double of the season (third in conference play) with 14 points and 11 rebounds on 6-for-7 shooting.

The Sooners, who shot 58.8 percent in the first half, came out on fire, leading by as many as 23 points with 7:56 left, but TCU fought back and narrowed the Sooners lead to 17 with one minute remaining. A Campbell-Olds layup secured a 19-point OU advantage heading into halftime at 45-26.

OU started the second half flat, but a 3-pointer by Little created energy with 15:45 remaining. The Sooners were able to keep at least a 17-point lead for the duration of the game thanks to Little's four second-half 3-pointers and a balanced attack coming off the OU bench.

The Sooners return to the court at 8:15 p.m. CT Tuesday, Feb. 17 in the Hilton Coliseum when they face Iowa State. The game will be televised on Fox Sports 1.