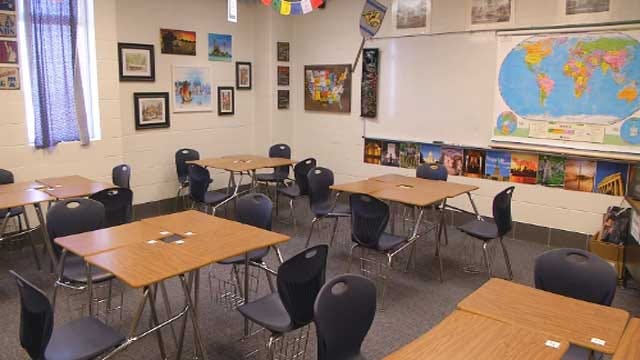 News 9's Justin Dougherty has reaction from within the classroom.

The 2014 AP U.S. history framework adopted this fall is being taught in classrooms all across the world.

But now, Oklahoma lawmakers want to wipe the course off the board and students aren't staying in their seats.

The backlash from the bill that will ban AP US history has created a firestorm across Social Media. Like Twitter, Facebook and even Change.org, where a petition against the bill has collected over 10,000 signatures.

"It changed the way I think, it helped me to become a critical thinker and a critical writer," said Sarah Hilbert, former AP US History student at Midwest City High School.

The bill calls for state funding to be cut on the current AP US History course and Oklahoma to create its own. Fisher and his supporters draw comparisons of the framework to common core and leaves out the idea of “American Exceptionalism.”

"In essence we are having an emphasis on what is bad about America," said Representative Dan Fisher in a recording from the Tulsa World.

South Moore History Teacher David Burton, disagrees and feels learning is accomplished when students can look back at where America got it wrong and where the nation is now.

"I left the meeting feeling very demoralized as if my passion in teaching U.S. History is under direct attack by people who aren't as informed as they claim to be," said Burton.

Dr. Scott helped write the current framework and said everyone has an ideology, and these lawmakers are confusing theirs with American History.

"There can be other versions, but you think you can impose those views on people passively it's going to work like that," said Dr. Scott.

Hilbert is proud to say she formed her own opinions.

"I learned about the good and the bad and I'm still proud to be an American," said Hilbert.

For Oklahoma to create its own version of the AP U.S. history framework, the State Department of Education estimates it would cost the state just under $4 Million.

According to Rep. Fisher's bio, he graduated from Arkansas Tech University with a degree in Secondary Education and Math. He is a pastor by profession.

Senator Josh Brecheen has authored a similar bill in the senate, and his bio states he is a motivational speaker with a degree in Agricultural Communications/Animal Science from Oklahoma State University.

Also, Edmond and Norman schools took a flash poll of students and parents in reaction to the house committee vote, and a total of 6,627 responses were collected. According to the districts the four-question poll, it overwhelmingly indicated that Norman citizens do not agree with lawmakers' actions.

The results from district spokespersons are below: