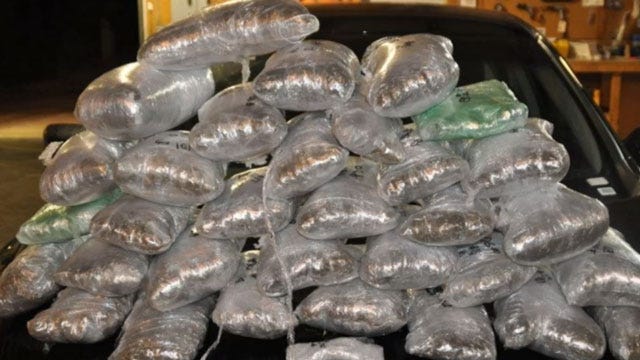 A traffic stop for a speeding violation Friday night in Oklahoma City turned into a 40-pound pot bust.

The Oklahoma County Sheriff's Office said when a deputy caught up the the speeding violator, 24-year-old James Cechetini, he smelled pot.

Cechetini and his 24-year-old passenger Zachary Reid both denied they'd been smoking any. However, that deputy got his K9 partner named 'Thor' to check out the car. Thor quickly indicated there was pot in the trunk. And sure enough, the deputy found 40 pounds worth of the “chronic” in the trunk.

Cechetini and Reid were taken to jail, their bonds set at $25,000 dollars.

This was the second large drug bus by the Oklahoma County Sheriff's Office in less than a week.