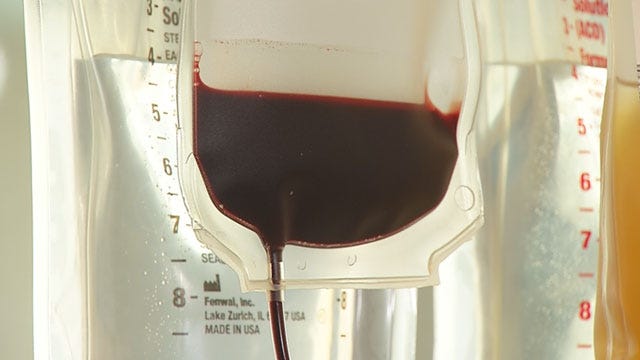 The winter storm we are crawling out of caused treacherous road conditions, crashes and a big setback for blood donations.

The Oklahoma Blood Institute said the state's supply has suffered because people cannot get out to donate.

Even a few donors were a welcome sight for the Oklahoma Blood Institute on Tuesday compared to Monday.

“I kind of realized, 'It might not be a good day,' but when I got up this morning the roads were OK so I didn't worry about it, I just came in,” said Diana Hamidi.

Robert Bishop has been donating for 48 years and said he headed in once he saw the roads were okay again.

Most of the chairs were empty 24 hours ago. OBI needs 700 people to donate every day to keep up with hospital demand and that was cut in half due to slick roads and canceled blood drives.

“Especially high schools that were booked and planned for yesterday and today that are closed, but the need for blood doesn't stop,” said Leslie Gamble with OBI.

Another round of winter weather Friday could do the same thing all over again.

“So we have some kind of magic window of time here, you know, we have today Tuesday, Wednesday and Thursday that donors can come in,” Gamble told News 9.

The agency has been on the phone asking donors to come in, sent out emails and even posted messages on social media.

“We're asking people as the roads improve in their area to really make it a priority to get out and donate blood,” Gamble explained.

OBI is hoping for a surge in donors, before donations drop back off Friday.