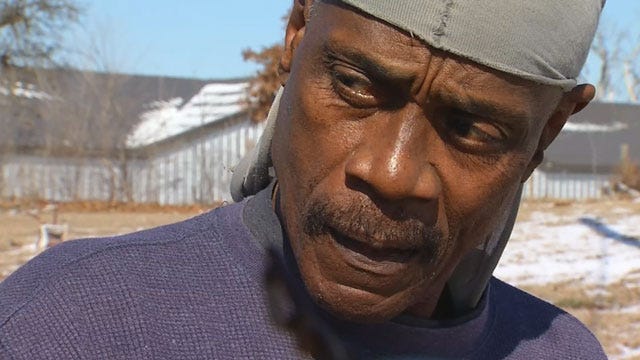 The former owner of 'Rudy' the horse, who was found near death last month in northeast Oklahoma City, gave his side of the story.

Oscar Jones, 66, said he feels terrible about what happened. Jones called Oklahoma City Animal Welfare on New Years' evening. He discovered his family's horse had broken from his pen, and had become tangled up in barbed wire fencing on the other side of the property. Jones said he called several people in addition to animal welfare that night looking for help, but he said because it was a holiday nobody showed up.

The following morning, animal welfare arrived at 9 a.m. and found Jones' horse, his father had named 'Buttermilk' 19 years ago. The horse had been torn up severely by the barbed wire, but investigators said the horse's ears and both eyelids had been ripped off, probably during attacks by other animals during the night.

“I hate that for the horse man,” a visibly shaken Jones told News 9 from his driveway Tuesday afternoon.

Blaze's Tribute Equine Rescue in Jones took possession of the horse back in January. They renamed him Rudy. Blaze's Tribute's Natalee Cross told News 9 it was clear someone had been taking good care of Rudy before “that horrific event changed his life.”

Jones said he's very thankful someone rescued the horse he said used to belong to his father. “I take care of my animals. That was just one of those accidents,” he said.

However, on Feb. 5, Jones was charged with Misdemeanor Animal Cruelty in Oklahoma City Municipal Court. He faces a March 9 court hearing.

The penalty for that offense could include a $1,200 fine, and or six months in jail. “It's a sad situation all the way around,” Natalee Cross said.

She said Rudy is getting much better. She said she knows this, because he is constantly itching around his face, which she said means his wounds are healing.

When word of what happened to Rudy got out on the worldwide web, people from literally all over the world poured more than $20,000 into a YouCaring account for Rudy's continued care.

1/4/2015 Related Story: Severely Injured And Left For Dead, Rudy The Horse On The Road To Recovery