The Show Must Go On! OKC High School Play Will Take Place Despite Bad Weather 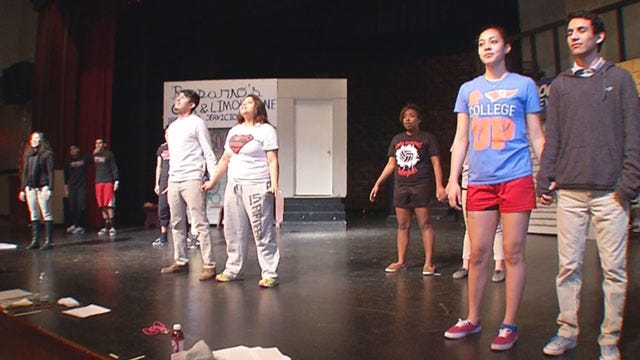 This wild week of weather has one Oklahoma City school scrambling to pull their show together for Opening Night.

U.S. Grant High School had back-to-back canceled rehearsals due to snow. The school's performing arts department has been preparing for their musical since late last year. But with the holidays and the recent rough weather, they haven't had much time to rehearse.

On the run, the cast of U.S. Grant High School students is moving quickly.

"We've been working really hard on that all day in order to make sure that everything's perfect," said Music Director Taylor Forester. "Getting extra props if something breaks or making sure programs get folded or double checking all the lighting cues."

About 30 students are in the production of Tony-Award winning musical "In The Heights”. The show centers around the changes in a tight-knit New York City neighborhood, Washington Heights, when someone wins the lottery.

“It's a huge production, especially for a high school to be doing,” Forester said.

Something the cast didn't expect were canceled rehearsals for bad weather the week of opening night.

"We only have like one day to practice. I was just like, ‘Calm down Jorge. You're OK. You know it. So don't stress over it,'" said lead actor Jorge Luna, who plays Usnavi de la Vega in the musical.

As the cast puts each prop in place, they're hopeful it will all come together, and people will fill the seats.

No matter the unexpected changes, the show will go on.

“Because this is Oklahoma, you don't cancel something because of the weather, because you never know what's actually going to happen," Forester said.

The musical begins at 7 p.m. Thursday through Saturday. Tickets are $7 at the door.

The Show Must Go On! OKC High School Play Will Take Place Despite Bad Weather