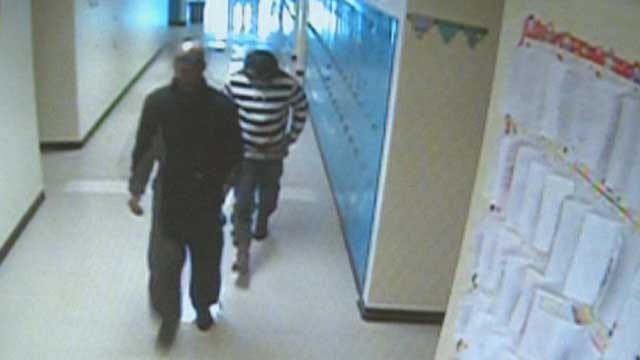 A security scare at a metro school has administrators looking to improve safety.

Two men were caught on camera wandering the halls in the Millwood School district in Oklahoma City.

It happened around 5:30 p.m. Wednesday, and the superintendent said they managed to steal a teacher's purse, but it could have much worse.

“As a superintendent, my first thought was thank the Lord there are no children in this video,” said Millwood School Superintendent, Cecilia Robinson.

At first, Robinson thought the men may have been students. But after taking a closer look, it didn't take her long to realize these men weren't supposed to be on campus.

“And we followed the video and watched them drive in off of Martin Luther King, drive around the campus, come up to find an open door,” said Robinson.

One man made it into a classroom, the other acted as a lookout peeking around the corner as his partner rummaged through the room.

Then, it appeared they were about to do the same thing in the classroom next door, but a teacher was inside and the two rushed out.

“If we had more secure doors, this would not be an issue,” said Robinson.

So, the district of about 1100 students and 70 teachers, is preparing to propose a critical bond for security improvements.

“And it will go to add a vestibule at every entry point, so every school has a main entry point that they can be buzzed in,” said Robinson.

After hours, Robinson said all of the outside doors, like the one the suspects entered would be secured with alarms. The hope is to have only one main point of entry.

“We have lots of family, lots of people who have been here for many many years, and so we have a really trusting campus,” said Robinson. “For something like this to happen is very alarming.”

Robinson said there is heightened security on campus during school hours, which includes two Oklahoma County Sheriff's deputies, but security after hours is a problem.

The bond issue that will address security on Millwood's campus will be on an April 7th ballot.