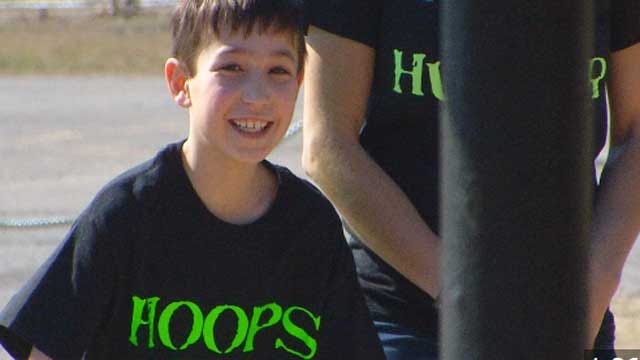 A Yukon boy hit by a vehicle at school is getting support from the same people who saved his life. The third grader is recovering from severe leg injuries.

Emergency responders are playing in a charity basketball game Thursday night, to help with the medical bills.

“I wish I could get up and walk back on the basketball court and shoot,” Bell said.

Instead, the 9-year-old is sidelined as he recovers from a broken leg, as well as torn muscles, tissues, ligaments and skin from an accident on January 16th.

“I was getting my bag and I was walking outside and I sat down on the bench and then the car came,” he told News 9.

Bell was sitting right outside his elementary school when an SUV in the parking lot hit him.

“When I turned the corner and saw the car in the building, my heart sunk,” recalled his mom, Ashley Bell. “I just started praying that he wasn't pinned between the car and the building and that would be the last time I'd ever see him again,” she added.

Bell's leg was degloved, which means the skin; muscles and tissue were peeled away from his bone. Several surgeries, skin grafts and blood transfusions later, his leg is still numb.

The same Yukon firefighters and police officers, who helped him that January day, are now playing a basketball game against each other to raise money for him.

“I think it's great, I was happy that they wanted to support me in my accident,” Bell said.

“It's amazing, it just goes to show that they are heroes, they are more than just fighting fires and putting away bad guys,” his mom explained.

All the donations and proceeds from the game will go to Bell's family to help pay for his treatment, which is nearing $500,000 because insurance is not covering everything.

“It helps not only financially, but it helps emotionally and spiritually and it's just uplifting and reassuring that we still live in a magnificent world,” Ashley Bell said.

Aside from the basketball game, there will also be door prizes, a silent auction and an Italian dinner you can buy.

If you cannot make it out to Yukon, you can still support Hunter through a donation fund.

The driver who hit Hunter was arrested and Yukon Police said formal charges may be pending.

To make a donation for Hoops for Hunter, go to any Yukon National Bank location or visit http://www.gofundme.com/kubks0.