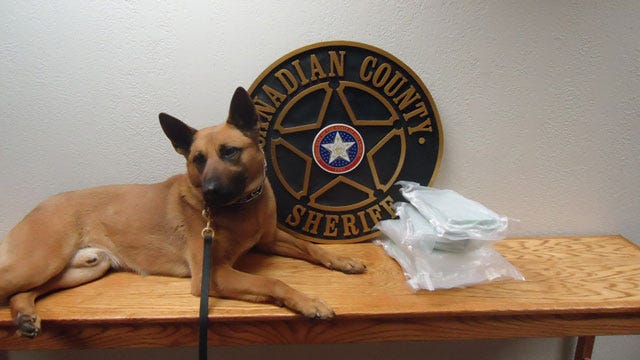 More than $200,000 worth of cocaine was taken off the streets thanks to the Canadian County Sheriff's Office.

Deputies along I-40 pulled over 'ZZ Tyree Jabbar' of California for an inappropriate lane change early Saturday morning.

They said they immediately knew something was off.

“This guy was really bizarre, his behavior was extremely nervous and he really just had a tough time carrying on a normal conversation with them,” said Undersheriff West.

Pickles was downwind and before he even reached the car, he picked up the scent.

“He began to alert before he ever got the vehicle and, he basically can detect the odor of the cocaine in the vehicle,” West explained.

Someone had put hot sauce, dryer sheets and soap on the packages to try to hide the odor, but it did not fool Pickles.

“There's a lot of criminal activity, drugs, drug trafficking even large amounts of cash that are traveling up and down the interstates, so we try to be pretty vigilant,” West told News 9.

Deputies said they still don't know exactly where those drugs were heading.

Jabbar was placed in the Canadian County Jail on a complaint of Drug Trafficking After a Former Conviction.