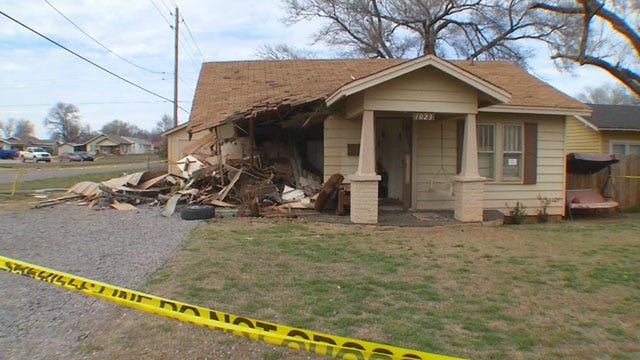 But 57-year-old Judy Rheaume wasn't driving and wasn't a passenger in the vehicle that wrecked. Rheaume was asleep on a couch in her home, when a stolen Jeep Liberty plowed into her house.

Police said 19-year-old Connis Knorring was driving the Jeep, and was running from police when the accident occurred. Knorring died at the scene.

Judy Rheaume is in serious condition at OU Medical Center with a fractured neck, spine, and broken ribs.

Elk City Police Chief Eddie Holland said this is why people should never run from police.

“It's always a lose, a lose for everyone. So my Lord, don't, don't, don't run from police,” said Eddie Holland, Elk City Police Chief.

Chief Holland said Connis Knorring was wanted for another crime. An officer attempted to pull Knorring over, when he attempted to flee.