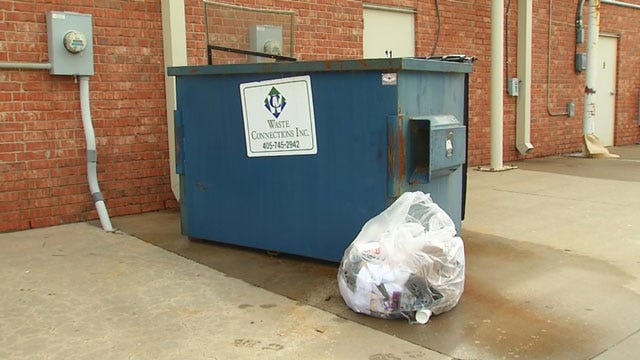 A metro man found bank statements, deposit slips and account numbers in a dumpster in Edmond.

The man was shocked to see the personal banking information discarded of that way and pulled it out of the trash before it got in the wrong hands.

The documents all had IBC Bank logo and letterheads.

“Right there - name, account number, what she's got in there,” said the man who found the documents, pointing to one of the deposit slips he found.

He does not want to be identified, but explained he found customer account numbers, deposit slips, deposit bags and more from IBC Bank thrown into his business dumpster near Santa Fe Avenue and 150th Street.

“There is no reason for bank deposits to be in that dumpster,” he said.

Some of the names on the deposit slips were individual's, some were big businesses like Victoria's Secret, Braum's, Popeyes and Aeropostale.

“These people, individuals and businesses are having their account numbers just thrown in the dumpster,” the man told News 9.

He discovered the trash bags Wednesday night, thinking someone had illegally dumped several trash bags into his dumpster.

He dug the bank trash bags out before they fell into the wrong hands.

“This is just a small portion of one bag, there were about four or five bags stuffed full of papers,” said the man. “This was in the top bag. Some of them were shredded. This one was not,” he added.

News 9 went to the IBC branch listed on some of the documents and asked the manager about it.

She said she was shocked and that the bank shreds every document before discarding it and that she would get to the bottom of how the papers ended up in that dumpster.

The man said he just wants the bank to be aware and to take the proper steps to make sure it does not happen again.

“If they are doing it in my dumpster, what other dumpsters are they doing it to because that bank is nowhere close to here? That's my concern,” he said.

News 9 turned over all of the documents to IBC Bank so that they can be disposed of properly.

"At IBC Bank, our first priority is maintaining the privacy, security and confidence of our customers. We adhere to policies and procedures that protect sensitive information and are continuously validated. This situation appears attributable to human error contradictory to those policies and procedures. Management has taken immediate steps to reinforce its procedures, contact affected customers and ensure all employees comply with written policies that secure every IBC customer's account.”