Elk City Woman Recovers After Driver Crashes Into Her Home 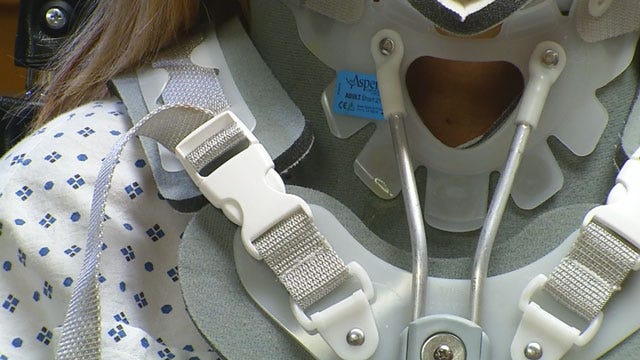 An Elk City woman, who was critically injured a week ago when an SUV slammed into her house, spoke with News 9 Tuesday afternoon. Judy Rheaume, 56, is a long-time teacher, and head girls soccer coach at Elk City High School. Last Tuesday night, an auto burglary suspect lost control of an SUV he was driving to get away from police.

Police dashcam video showed police had halted the chase because of the high speed. Regardless, that vehicle ended up smashing into Judy and Jeff Rheaume's house. Judy was asleep on a couch in a front room when it happened. The fleeing suspect died at the scene.

There are a lot of reasons why Judy Rheaume should have died too. When her husband Jeff got to her, she was in a kneeling position under the couch. She had shattered several bones in her back, her neck, and she had eight broken ribs.

Judy credits her family's deep faith for giving her the strength to pull through this. “I want to thank all my family and friends and everyone who is praying that has contacted me,” she said. “You know you don't know how many friends you have until something like this happens.”

When Oklahoma City Thunder team officials learned Tuesday night that the Rheaume's had been watching the Thunder play on TV shortly before last week's tragic accident, they arranged a “shoutout” to Judy during the second quarter of Tuesday night's home game against the Los Angeles Lakers.

A handful of fundraisers are being organized to help the family with Judy's medical expenses. There will be a benefit dinner and silent auction Friday April 3 at Elk City High School. The Elk City Golf and Country Club will host a benefit golf tournament Saturday, April 11 as well.

A local physical therapy clinic has offered free services to Judy when she is able to go home after a two or three-week stint at OU Medical Center. A Judy Rheaume GoFundMe account has been established, as well as a ‘Rheaume Family Fund' at all of the Bank of Western Oklahoma's six locations. For more information on that, call 580-225-3434.

Elk City Woman Recovers After Driver Crashes Into Her Home