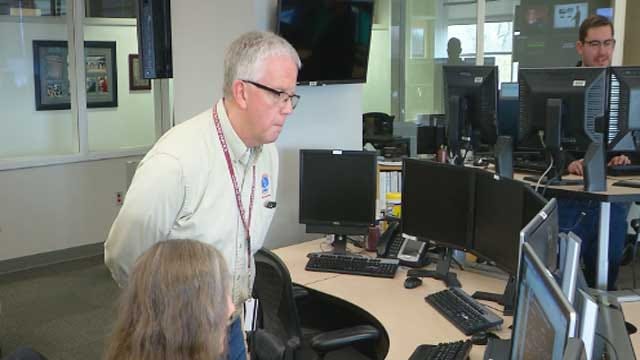 Some Moore residents are criticizing the National Weather Service for the lack of warning they got Wednesday night.

The tornado warning from the NWS was issued minutes after News 9 and others spotted the rotation on the ground.

"We're going to go ahead and say tornado warming. Let's just get this over with," Meteorologist David Payne said on air Wednesday night around 6:35. It was five minutes before the city of Moore sounded their tornado sirens and eight minutes before the tornado warning was issued for north Cleveland County.

"6:40 pm is whenever our Emergency Management director activated the city wide sirens," said Moore City Manager Steve Eddy. "The sirens are intended primarily or 100 percent intended for people outdoors who may not have access to a television."

Rick Smith, Warning Coordinator Meteorologist for The Norman Weather Center, called the weather event that unfolded that night complicated, but not unheard of.

"The character of the storm and what we were seeing on radar the main threat that we believed was going to happen was a big broad area of damaging winds, hurricane force winds," said Smith.

Shortly after News 9 Chief Meteorologist David Payne issued his own warning, News 9 began showing the first video of what appeared to be a tornado touching down in Moore.

"It took some time. Even seeing pictures on television sometimes it's difficult to pin point exactly where that is," Smith said.

"You have a situation over here where we might have a developing tornado then two, three minutes later that area has now instantly focused somewhere else. So things change instantly," said Meteorologist David Payne.

In addition to lag in issuing a warning, Moore residents were confused by tweets and images on TV showing something completely different.

"When we were saying no tornado I. Southwest Oklahoma City we had yet to see the images on television. That had not happened at that time," said Smith.

Everyone we spoke with from NWS to the City of Moore to David Payne said this:

You need to be weather aware on days like these, even if there's not a tornado warning issued.