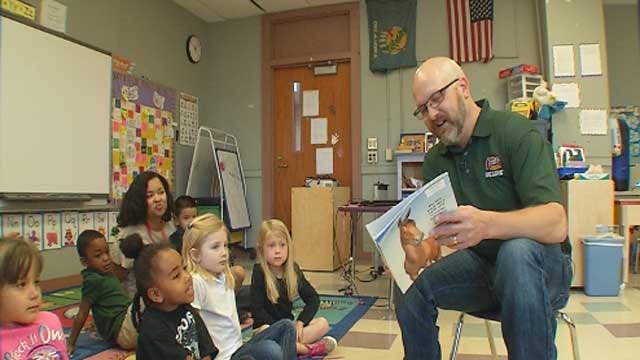 An Oklahoma City elementary school is raising money for a new playground for its youngest students, and school leaders came up with a great idea.

The principal and the general manager of a local business swapped roles for a day on Friday to publicize the fundraiser.

Leah Anderson was unsure how she would handle the lunch rush.

“A little nervous, I don't know how it's going to be working with the drive through, so we'll see,” Anderson said. “Hopefully I won't mess up any orders,” she added.

Anderson is happy to trade places with the Raising Cane's general manager to help her students. Principal Anderson and GM Scott Allen joined forces to raise $10,000 for a new playground for Pre-K and under at Gatewood Elementary and the surrounding community.

The school recently built a new playground for older kids, but it is not safe for little kids to use.

“Hey, why don't we swap places just to have fun and to help raise awareness,” Allen explained about where the idea originated.

Allen is an expert in all things chicken fingers but what about being in charge of hundreds of kids?

“You worry about dealing with little ones running around,” Allen told News 9. “I've dealt with them at home, but that's just two at a time, that's not dealing with 200 at a time,” he chuckled.

He sat in the principal's office, roamed the halls and read to children at Gatewood on Friday.

“C-A-N-E-S, do you know what that spells,” Allen asked the children. “Chicken fingers,” one little girl exclaimed.

Oklahoma City Public Schools has been working hard to bring local businesses and schools closer together, and this partnership is a great example of that effort.

For the rest of the day, customers can mention “Gatewood Elementary” at the Raising Cane's at NW 23rd and Penn and the school will get 15% of the proceeds.

The school hopes to raise even more playground money at its Gatewood Gator 5K on Saturday, April 18th at 9:30 a.m.

Register for the Gatewood Gator 5K