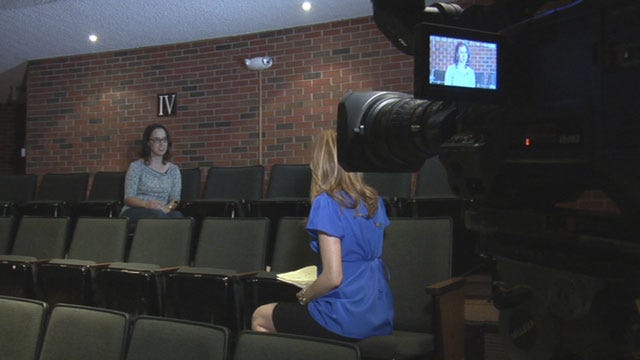 To commemorate the 20th anniversary of the Alfred P. Murrah Building in Oklahoma City, theater students at Oklahoma City University produced a play that reflects on the events of April 19, 1995.

The play focuses on untold, personal stories of the bombing based on interviews with the victim's families, survivors, first responders, and others present that day.

"This is real, these are real people's lives, real people's feelings," Courtney DiBello, the director of the production said, of their verbatim approach.

The commemorative performance was designed to illustrate the resilience of Oklahomans through some of those who played a key role in the aftermath including former Mayor Ron Norick, Fire Captain Chris Fields, and former News 9 anchor Jenifer Reynolds.

"I thought whoever got cast as her [Jenifer Reynolds] would have to, you know, go a little bit the extra mile to make sure they represent her accurately," Michelle Roselle said. She feels an extra pressure to be cast as Reynolds, she added.

Roselle studied Jenifer Reynold's cadence and mannerism to the set.

"She is a storyteller and just really paints a vivid picture," Roselle said, "I want to be able to portray that in the best way that I can."

For the 'real' Jenifer Reynolds, there were similar thoughts on April 19; wanting, on such a significant occasion, to be the best she could be.

"I remember saying a prayer as I came into town, let me be good enough for this, let me not fail at this," Reynolds said about the pressure of broadcasting the details of the tragedy.

Reynolds also provided descriptions for the OCU production that, in a sense, are now history lessons for the students, many of whom weren't born at the time of the bombing.

So, the production is as much an educational experience as it is theatrical.

"We are trying not to just dwell on the past and sort of revel in how tragic that was but find a way to move forward," said Roselle.

The production promised to deliver a celebration of the tenacity, recovery and healing process of Oklahoma City.