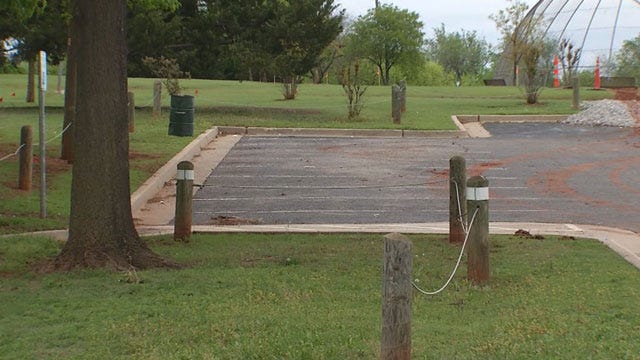 Two Oklahoma City police officers made an unexpected find while responding to a call at a city park. They were called out about a suspicious car there after dark, but what was inside changed the entire situation.

“It's rare that we get to help people in these capacities,” Officer Jeff Dutton said.

Cold concrete and lines that mark a few parking spaces; it was a place like this where police found a parked car, or home for a mother and her four children.

It's most certainly not what they expected when they called out to a city park. They showed up because it's against park rules to be out after 11 p.m.

“You have your comments on the call. You have what dispatch is telling you but not until you get there to experience it,” officer Davin Boyett said.

The family of five had nowhere to go. The officers didn't know where they came from or where they were going.

“Really our main focus was getting them out of that environment and putting them somewhere safe,” Dutton said.

They filled up their car, gave the children toys and found a shelter for the family to stay for the night, a place to shower and get a good night's rest. You can imagine what it was like for a mother and her four children to sleep in a vehicle.

They are small opportunities and may not come often, but you never know what a curfew call to the park could bring.

“It's the reason why anyone puts on the shirt. Anyone who puts on this uniform is for that opportunity to help,” Dutton said. “Hopefully it was just a little bit of a ray of hope, a little bit of point down the right road.”

The family has since checked out of the shelter and was set up with programs to help get them on their feet.