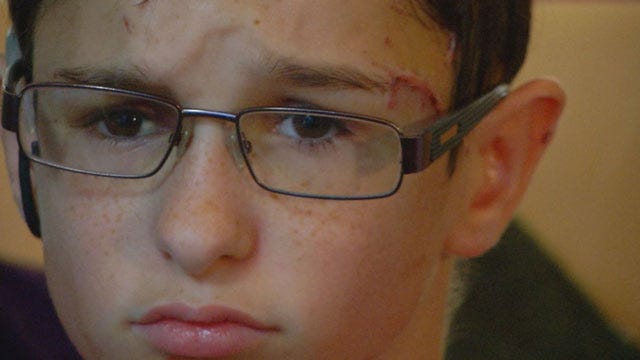 An 11-year-old boy from Moore was seriously injured Saturday during an attack by three Rottweiler dogs in Little Axe.

Elijah McKenna is deaf, has special needs, and a sleeping disorder. He was playing in the woods next to his grandparents' home in Little Axe Saturday, when three neighbors' dogs attacked him. McKenna has several lacerations to his head, his face, his stomach, and his back.

McKenna is the same child who got hold of his mother's keys, and drove her car 30 miles into Oklahoma City before wrecking in the early morning hours of March 12.

His mother, Rhianna Bravenec said Elijah doesn't remember any of it.

However, Saturday's dog attack has left him unable to walk, and will need a wheelchair in order to return to school. “I am, I am very overwhelmed,” she said Tuesday.

Bravenec said most of her son's health issues trace back to the fact he was born three months premature, and weighed only one and a half pounds at birth.

A GoFundMe account has been set up to help the family.