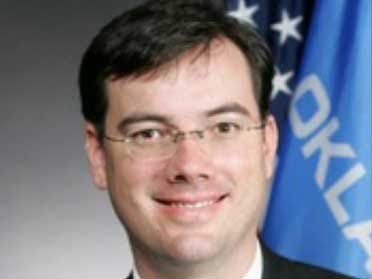 Cargill notified members of the House's GOP majority of his resignation by telephone during a conference call that Republican House members took in their individual offices. Cargill did not appear personally before caucus members but planned to make a public statement later Monday.

Cargill, at 36 the nation's youngest state House speaker, quit the speaker's job just one week before the Oklahoma Legislature is scheduled to convene on Feb. 4. House rules state that if the speaker's position becomes vacant, the speaker pro tem, Rep. Gus Blackwell, R-Goodwell, will become acting speaker until an election is held.

Cargill, serving his fourth two-year term in the House, is in his second year as speaker. He was elected to the House's top job following a tumultuous term as Republican floor leader under former Speaker Todd Hiett in which Cargill resigned midway through the 2006 legislative session.

Cargill has been under fire following published reports indicating he submitted late property tax payments on his Harrah law office six years in a row and failed to file state personal income tax returns in 2005 and 2006.

Cargill took responsibility for the tardiness and apologized. But he came under harsh criticism from Democrats and the revelations eroded support from members of his own Republican caucus. Many House Republicans said voters in their districts were furious about Cargill's lapses.

The Oklahoman reported earlier this month that Cargill failed to file his 2005 and 2006 personal income tax returns until getting a Jan. 7 warning from the state Tax Commission. Cargill blamed a miscommunication with an accountant.

Cargill, an attorney, also fell months behind on many of the property tax bills on his law office, county records show. His company, Harrah Professional Partnership, bought the office in September 2001.

The property tax on the first year was paid on time but payments have been late every year since, records show.