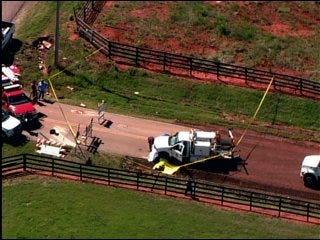 John P. Vallion, an Oklahoma County employee, was placing road barricades in northwest Oklahoma City when he was killed as his truck rolled over him Tuesday morning.

Vallion was spotted about 10:15 a.m. by a passer-by near Sorghum Mill Road and North May Ave.,  said Sheriff's Department spokesman Mark Myers.

Investigators were still trying to determine exactly what happened, but it appeared the left front tire of the truck rolled over and crushed Vallion.

Myers said Vallion was replacing road barricades that had been vandalized.