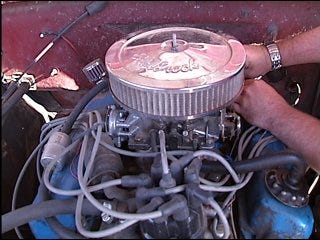 Gasahol, a mixture of gasoline and ethanol, could start destroying older engines, according to AAA's Chuck Mai. He said those driving a car made before 1985, should be weary of using the gasohol.

"The ethanol is corrosive," Mai said. "It'll damage plastic, rubber parts, your hoses, anything the gasoline-ethanol comes in contact with."

E-10 is being sold by gas stations across the metro because it's a cheaper blend of gas.

Mai said those driving cars older than 23-years-old are going to have to find gas stations selling pure gasoline, which could be difficult.

Mai said consumers driving cars made after 1985 shouldn't worry about using gasohol, but should check with the owner's manual to make sure the car can handle an ethanol blended gas.