One villager's lament: 'I have lost everything' 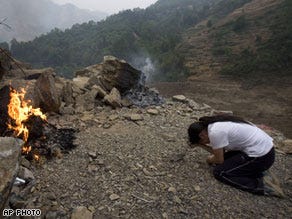 A mountain sheared off by China's massive earthquake swallowed the village whole, entombing an unknown number of people inside a huge mound of freshly churned brown earth. The road to the village ends in a tangled twist of metal and tar. The landscape, eerie and still, shows few signs of human life -- a soiled green floral scarf, a rubber pipe, a log.

Wen Xiaoying, 32, held up one hand as she ticked off the family members buried somewhere in the muck before her -- her father, her mother, her sister and her brother-in-law.

"Oh God! I have lost everything," she said, her voice shaking as she surveyed the valley for the first time since returning from her job in far-off Guangdong province.

The landslide blocked the valley's Qingzhu river and a lake rising behind the wall of debris threatened Saturday to break its banks and send torrents cascading into villages downstream. Fear of flooding in Donghekou and the town of Beichuan 60 miles to the south sent thousands of survivors fleeing Saturday in a region still staggering from the country's worst disaster in 30 years.

Panicky residents streamed out of the entire county surrounding Donghekou on the northern edge of the quake zone, spurred on by mobile phone text messages sent en masse by local government officials warning that the water level was rising and people downstream were being evacuated.

In Beichuan, rescue work resumed later in the day and experts were monitoring the blocked river above, the People's Daily newspaper said on its web site. The swift exodus underscored the jitters running through the disaster zone. A strong aftershock -- the second in two days and measured by the U.S. Geological Survey at magnitude 5.7 -- shook the area early Sunday for 45 seconds, causing people to run into the streets

The government's daily update added another few thousand bodies to the death toll as it continued climbing toward an expected final tally of at least 50,000. Cabinet spokesman Guo Weimin said 28,881 deaths have been confirmed so far.

The official Xinhua News Agency, citing regional officials, said more than 10,600 people were known to be still buried almost one week after the 7.9 magnitude quake hit, shattering thousands of buildings in dozens of towns and cities in Sichuan province.

"When I saw them the last time, we celebrated together," said Wen, a glimmer of a smile showing through as she remembered happier days. "I didn't expect it would be the last time I saw them."

"My village is over there," the 44-year-old said, gesturing to the swollen earth behind him. Asked where his family was, he could only shake his head.

"Only me," he said, and then set off without a backward glance.

Drizzling rain in the valley added to the gloom, and to the fear of carloads of people who clogged the twisting mountain roads as they streamed out of the region.

The number of security forces helping victims rose to almost 150,000, and the government added cash payments to victims to its response.

The government would give $715 in compensation to each family that lost a member in the earthquake, China National Radio reported Saturday on its web site. At a State Council meeting hosted by Premier Wen Jiabao in Beijing, the government also decided it would also hand out a daily ration of food and $1.4 to survivors, the report said.

Almost a week after the quake struck, rescues were still occurring.

Rescuers pulled at least seven more survivors from collapsed buildings, the last a man saved after 128 hours. Both of his legs had to be amputated. Another, 20-year-old highway worker Jiang Yuhang was pulled free shortly after his mother arrived from a neighboring province.

"I was expecting to see my son's body. I never expected to see him alive," his mother, Long Jinyu, said on state television.

Experts say buried earthquake survivors can last a week or more, depending on factors including the temperature and whether they have water to drink, but that the chances of survival diminish rapidly after the first 24 hours.

Nearly a week after the quake, soldiers who first arrived with little but shovels were better supplied. In the town of Longhua, rescuers worked through the day, using saws, drills, torches and hands, to free 31-year-old Bian Gengfeng from the wreckage of a six-story apartment building.

A man rescued from the same site Friday told rescuers that he had been talking with a woman still trapped, setting off Saturday's effort.

"Uncle called me yesterday and said 'mom was alive' and I should come and wait here," said 10-year-old Luo Ting, who watched her mother being rescued.