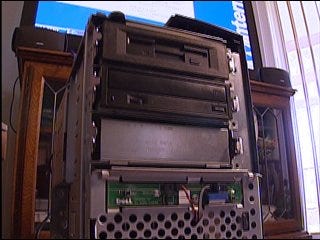 The Oklahoma City resident Joe Sills who know owns the computer, said he was shocked at what he found when he booted it up.

Sills buys surplus state property and turns a profit by reselling it online, but said he's holding the computer, which contains some extremely valuable information.

"The information on there is probably worth twenty million easily," Sills said.

Sill said he came across a file containing thousands of names, addresses and social security numbers of Oklahoma residents.

"I thought the government was supposed to wipe all this stuff," Sills said. "I mean, with this much information, someone could go out and have a shopping spree with tons of people's accounts and make people's lives miserable."

The computer was one of more than 10,000 that were surplussed and sold at an auction through the Department of Central Services.

"Most state agencies that handle confidential records know that prior to that computer reaching surplus property, they have to drill a hold in the hard drive," Sills said. "I'd be furious. I'd want to know...why the government wasn't doing what they said they were doing...by wiping it."