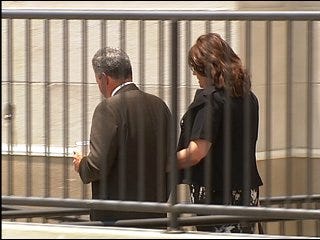 MUSKOGEE, Okla. -- The federal corruption trial against state Auditor and Inspector Jeff McMahan and his wife is coming to a close.

The prosecution rested their case on Monday. McMahan and his wife Lori are charged with nine counts of mail fraud, conspiracy, and taking bribes from Kiowa millionaire businessman Steve Phipps.

On Tuesday, a judge listened to testimony from Lori McMahan about her plea agreement with prosecutors.

Prosecutors offered Lori McMahan a plea deal if she would testify that her husband was present a Shawnee restaurant and took bribes from Phipps.

Among the final prosecution witnesses was FBI agent Steve Kaitcer, who testified that Jeff McMahan gave conflicting stories about Phipps during three interviews with authorities, conducted at the auditor's office at the state Capitol between August 2006 and August 2007.

Phipps testified earlier in the trial that he had helped illegally finance McMahan's campaign, took the couple on trips to New Orleans and bought Lori McMahan jewelry in an effort to receive political favors.

Phipps owned abstract businesses which were regulated by the auditor's office. He is cooperating with prosecutors as part of a plea agreement.