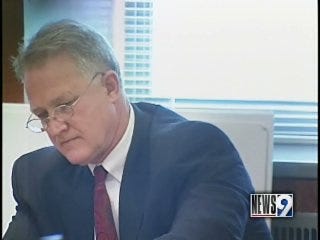 Attorney Michael Gassaway has been disbarred, according to court records.

The disbarment was recommended by an Oklahoma Bar Association panel.  The three-member disciplinary panel claimed Gassaway violated the rules of professional conduct for attorneys on at least five occasions.

The panel's recommendation was taken to the Oklahoma Supreme Court who rescinded Gassaway's license to practice law on Tuesday. Click here to read the court's opinion (PDF).

"Mr. Gassaway certainly saw this coming," said Billy Bock, Gassaway's attorney. "He is the eternal optimist and hopes for the best in all situations both him personally and his clients behalf. But this is not a huge surprise to us."

The panel accused Gassaway of dishonest practices in dealings with clients and with fellow attorneys and the courts. It also said he was willing and eager to trade sexual favors for attorney fees when offered the chance by a client's girlfriend in 2006.

A misdemeanor count of solicitation was filed against Gassaway two years ago but a jury acquitted him of the criminal charge.

It's the second time the veteran attorney has been disbarred. He voluntarily surrendered his license in 1995 after being convicted on federal tax charges. His license was reinstated in 2002 after serving a prison sentence for the tax charges.

Bock said he doesn't think the courts will give Gassaway another chance.

"I think they believed Mike has had enough rope to hang himself and that he hung himself," Bock said. "I think immediate and permanent means he's got to stop know and it's not going to go back."

The Associated Press Contributed to this story.