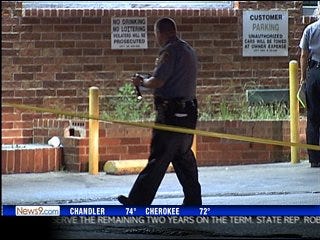 A man was shot Tuesday night at a northeast Oklahoma City convenience store.

The man was hospitalized after being shot at Kelley's Market at NE 36 and Kelley Avenue. Police said an altercation between two men possibly started in the parking lot and ended in the store.

"We are led to believe that there was a verbal altercation between the two subjects that escalated to one producing a hand gun and firing multiple times at the victim," Lt. Ron Bacy said.

The victims name was not released.