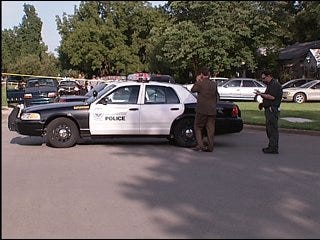 OKLAHOMA CITY -- An 18-year-old died Monday after he shot himself while playing a game of Russian Roulette, police said.

The shooting occurred at 3804 NW 11 Street in front of the teen's 14-year-old brother, the victim's father said.

Neighbors are sad and confused, wondering why a teenager would play such a deadly game and why he would do it in front of a sibling.

"I knew something wasn't right," neighbor Dale Victor said. "I talked with Elisio, the father, and it was his son Elisio Jr."

The 18-year-old was a young man who Victor said had a wonderful attitude.

"His whole family looked up to him. He was next to the oldest son," Victor said.

The victim's father said his son just bought the gun Sunday and he wasn't sure why.

"He was playing Russian Roulette, spun the cylinder and shot himself in the throat," Lt. Jeff Cooper of the OKC Police Department said.

It's a situation Victor, who watched the boys grow up, called a crying shame and said it should serve as a warning to others.

"It's very sad, very tragic. You don't need to do that, that's advice to everyone in the world. It's a dangerous game," Victor said.

The police are investigating where and the 18-year-old bought the gun.