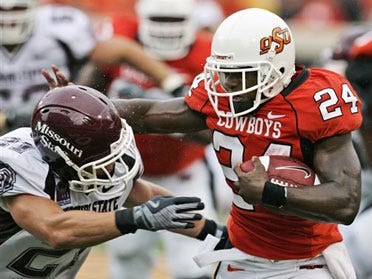 STILLWATER, Okla. -- Keith Toston ran for a career-best 148 yards and Oklahoma State had the second trio of 100-yard rushers in school history in the Cowboys' 57-13 win over Missouri State.

Hunter scored on runs of 8 and 4 yards in the first half and passed the 100-yard mark on a 35-yard scamper that set up his second touchdown.

He has passed the century mark in his first three starts, including a career-best 210 yards last week against Houston.

Johnson also had two touchdown runs and Toston scored on a 15-yard run. The Cowboys had their highest rushing total since 1988, Barry Sanders' Heisman Trophy season.