Sloping economy leads some into depression 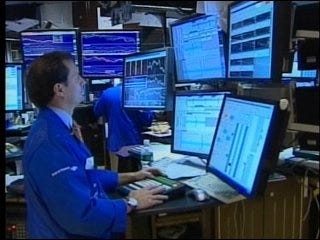 OKLAHOMA CITY -- Oklahomans haven't been hit as hard as other regions of the U.S. during the current financial situation, but people are just as concerned and some even seeking mental help to get through this.

In Ohio, a 90-year-old woman shot herself because she couldn't pay her mortgage and was about to get evicted.

In Los Angeles, a father killed his five family members and himself after he lost his job and fell deep in debt.

"My husband and I had been thinking all along that people were getting too panicky," market investor Jaunice Sawyer said.

Psychologist Stewart Beasley said some of his clients are concerned.

"I said a lot of older people who have retirement funds that are dwindling as they watch the stock market go down," Beasley said. "I see younger couples who are having difficulty balancing budgets and planning for college for their kids."

When it gets to the point where people are considering taking a life, Beasley said some see no other way out.

"Suicide is typically something where you feel like you have no options and so you're at the point where you've got to do something to take the pain away," Beasley said.

Signs that someone may be in trouble include:

People experiencing the symptoms should talk to someone or seek professional help.

"It's important that they express their emotions and don't just keep it inside," Beasley said. "When you keep it inside, the tendency is for it to become worse and worse and it appears to be worse than it really is."

Beasley said the stress could get worse for Oklahomans, especially with the change in seasons and the holidays approaching.

While many people are feeling the stress of the economy, those feelings trickle down to your children too.

Sloping economy leads some into depression