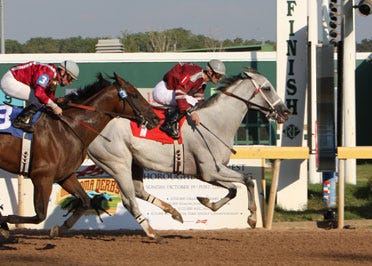 OKLAHOMA CITY - The bright gray Hard Rockin Robyn powered through fast fractions and still maintained the lead to the finish in Sunday's $26,050 feature for claiming runners going seven furlongs. Hard Rockin Robyn defeated seven others in the race where horses could be purchased for $25,000.

Owned by Poindexter Thoroughbreds of Springfield, Mo. and trained by Lynn Chleborad, Hard Rockin Robyn was coupled in the wagering with Will E Scat, also owned and trained by the winning connections. The 5-year-old gelding grabbed the lead in the opening strides and never relinquished the advantaged in holding off the late attempts by Okie Time and Seneca Summer in winning by a half-length.

Hard Rockin Robyn covered seven furlongs in 1:22.01 over the fast track under the guidance of jockey Alex Birzer.

The win was the sixth from 32 career starts for Hard Rockin Robyn, a gray son of Robyn Dancer from the Fortunate Prospect mare Hard and Fast. He won his first Remington Park race Sunday in picking up the winner's check of $14,694. Career earnings for Hard Rockin Robyn now move to $95,613.

Oklahoma Derby week has now arrived at Remington Park. Racing resumes on Thursday night at 6:30 p.m. The $350,000 Oklahoma Derby, presented by News9, is featured as the headline event of seven stakes races over the weekend totally $850,000 in purse money.

The 20th Oklahoma Derby will be contested on Sunday, October 19.