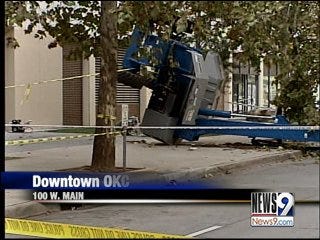 OKLAHOMA CITY - A man died after falling from a cherry picker Monday morning during a remodeling project downtown, police said.

According to police, the incident occurred at about 9:15 a.m. near 100 W Main Street between Robinson and Broadway.

The man was an employee of California based Belgard Remodeling Company, police said. He was part of a team working to remodel the outside of the Sheraton Hotel downtown. The man is not from Oklahoma.

Main Street remains blocked, but police said they anticipate having the westbound lanes re-opened within the hour.