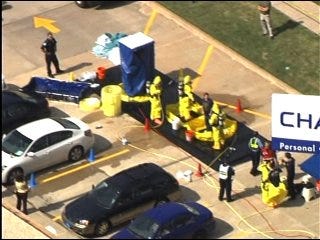 NORMAN, Okla. -- A Chase bank branch in Norman and two in Oklahoma City received letters Monday claiming to contain a substance that could kill whoever opened the envelopes.

FBI spokesman Gary Johnson said at least some of the letters did contain a substance, but an initial examination appeared to indicate it is not dangerous

Johnson says similar letters destined for other Chase branches in the area were intercepted before they were opened.

He says the letters said the threat was "based on past actions of the bank."

No dangerous substance was immediately found at the scene, officers said.

Five other banks in Denver, Colo. were also targeted by the threatening letters.