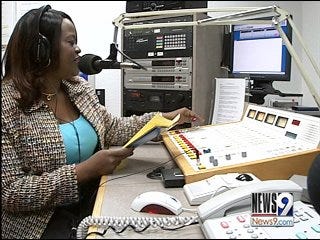 OKLAHOMA CITY -- From fights at school to teens committing murders, violence among young people is an issue in the metro.

Now, one metro mom said enough is enough and is hoping to stop the violence, over the airwaves.

"There has been so much child violence that it's unbelievable," Sonja Vaughn, Radio host against school violence, said.

Vaughn is a mother of two, a former teacher and a witness to a teenager shot by a classmate with and arrow two weeks ago.

"I saw a child lying on the ground and I just could not believe that and just to think of how everything came about, it just didn't make any sense to me," Vaughn said.

To add to the senseless tragedy, a fight broke out at Capitol Hill High School the same day. A Tulsa soccer player was beaten to death after a game several weeks ago and earlier this week, a shooting at Langston University. For the Metro mother, enough is enough.

Vaughn is combating a rising problem.

"We're going to start a campaign getting back to the basics by way of family life, by way of our children," Vaughn said.

The campaign consists of a panel of local experts called Think, Prevent, Live.

Time and determination is what the mother of two is pushing to keep kids safer.

"It's an epidemic in so many ways because if affects everyone, it doesn't matter who you are," Vaughn said.

This campaign also comes at a time for the Stop the Violence Week Kick Off Celebration, taking place at U.S. Grant High School on Monday.