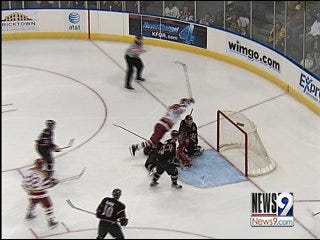 OKLAHOMA CITY -- Many sport franchises are taking big hits from the financial woes on Wall Street.

Fans are still packing into the Ford Center for Thunder games, but the NBA's success in Oklahoma City may come at a price for other teams, especially in these trying economic times.

Doug Sauter, head coach of the Oklahoma City Blazers, said the economy is forcing families to clamp down on the amount of money spent on entertainment, like sports.

"Our crowds are down and our numbers are down a little bit," Sauter said. "The entertainment dollar is shrinking."

The Arena Football League suspended the entire 2009 season due to financial issues complicated by the economy.

"The Yard Dawgz are doing wonderfully," General Manager Christie Cook said. "We actually operate with the Arena Football 2 League, so there's no direct affect of the suspension of the AFL for the Yard Dawgz season."

Cook said the economy is nothing more than a challenge they'll tackle head-on by keeping prices low.

"Our tickets are very affordable, starting at $10," Cook said.

The Blazers are hoping to heat things up by offering more promotions to fans and by negotiating a more hockey-friendly lease at the Ford Center.

"We're kind of the forgotten team," Sauter said. "A lot of talk and hype was Thunder and football, and we've just been here for a long time."

The Redhawks' management said it's too early to tell what kind of impact the economy will have the baseball team's upcoming season, but they're already planning promotions that will be friendlier to fans' wallets.