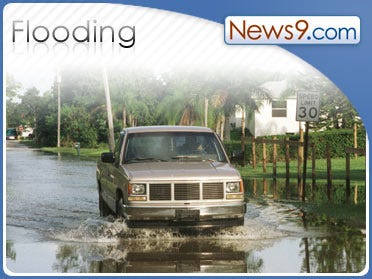 LA PAZ, Bolivia (CNN) -- Torrential rains in central Bolivia have swollen rivers and flooded streets, stranding scores of people and leading to the daring helicopter rescue early Friday of a woman and her sons trapped amid the raging waters of the Pirai River.

The strong current swept her husband away, and he remained missing Friday afternoon, CNN affiliates Unitel and Red 1 TV reported.

"I started to shake," the woman said afterward in a hospital room interview while her two young sons lay on gurneys. "I was scared."

Neither she nor her children were seriously injured despite being trapped more than seven hours on the river.

Video footage of the woman's nighttime rescue near Santa Cruz, Bolivia's largest city, shows the helicopter shining a search light on the darkened river and lowering a rescue bucket.

The woman, whose name was not given, and her family live on the banks of the Pirai and were trying to cross when the rushing waters trapped them. The older child perched on a log, while the woman held the other boy and stood among tree branches and other debris that offered her a haven.

Their ordeal started around 4:30 p.m. and did not end until around midnight.

The river rose by more than 9 feet in places Thursday and Friday, Unitel said.

Near Cochabamba, also in central Bolivia, the rain trapped a group of hikers in Molino Blanco, site of a well-known waterfall, Los Tiempos newspaper reported, citing police officials. The hikers became stranded Thursday during their walk back from the falls when a swollen river overflowed its banks, the newspaper said.

It was not known by early Friday afternoon if the hikers had been rescued.

No fatalities were reported anywhere; a dog was electrocuted by downed power lines in Cochabamba.

Several road closures were reported, including what is referred to as the Old Route between Cochabamba and Santa Cruz. The rain caused mudslides that closed off concrete roads in some places and washed out thoroughfares in other spots. But many roads, though muddy, were still passable.

In La Paz, the capital, officials reported having to tend to 20 emergency cases, none serious.

In addition to the rain, hail was reported in La Paz.

No relief is in sight until the rainy season ends in March, said government meteorologist Hubert Gallardo. The heaviest concentration of rain historically comes in January, he said on Unitel.