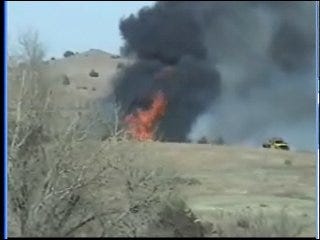 Fire Departments from Ellis, Harper, Woods, Woodward & Beaver counties as well as firefighters from Kansas responded to the large blaze.

The blaze was over two to three miles long, burning across approximately 11,000 acres.

State Highway 34 was shut down in Harper County for over an hour because of the smoke and windy conditions.

Matt Lehenbauer, Emergency Manager for Woodward County, said they had mutual aid assistance from fire departments as far away as Canadian County & Wichita.

Firefighters are exhausted. Some have been on the fire since just after midnight. Lehenbaurer also said there were evacuations earlier in the day of parts of Harper and Woodward counties, but those people were allowed back in a short time later.

High winds fueled multiple fires across the state Saturday. The winds were 28 to 45 miles per hour coming strongly from the southwest.

There were also two large grass fires burning near Mooreland. Multiple fire departments were also on the scene working to control that blaze.

No injuries or structure damages have been reported.