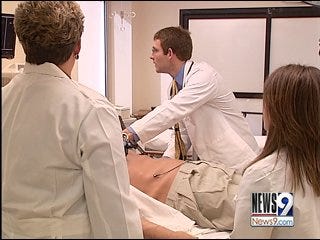 In those types of emergencies doctors are counted on to know what to do, there is now a new facility in the metro leading the way in preparing doctors for those situations.

The OU School of Medicine is OU Health Science's new $3.6 million Clinical Skills Education and Testing Center. It is a state-of-the-art training facility that officials believe is the future of medical education.

OU Medical officials showed off their new 22,000 square foot facility Thursday, complete with simulators, blinking monitors and blinking mannequins. It represented the latest effort to move OU Medicine to the next tier of medical schools.

"This isn't brand new, in terms of concept," Dr. Dewayne Andrews, Dean of the OU College of Medicine said. "What's brand new is this facility and the state-of-the-art that we've taken it to."

But the briefing was interrupted when a man on the front row called for help.

Several doctors helped the man out and took him to one of the simulated emergency rooms where they began to work on him, and where it was revealed that the incident was just a simulated emergency. The patient was Paul Smith; know as a standardized patient, someone who's trained to mimic actual medical conditions.

Interviewing them is an important part of students' training, but working with the simulators, in teams, they said, is what will really help bridge the gap between the classroom and the clinic, and gives the future docs confidence.

OU Health Sciences did have this type of skills training before. They've been a leader in developing the testing center, but they were doing it in 3,500 square feet of space, as opposed to the 22,000 in the new facility.