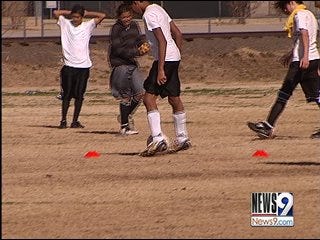 EDMOND, Oklahoma --The Edmond School Board continues to consider a drug testing policy for students.

Parents voiced their concerns about the policy at a public forum Monday night, but parents aren't the only ones who have an opinion. Another metro school district is hoping to see Edmond adopt the policy.

Read more about why the district believes their students are more likely to use drugs than their national peers.

The Mid-Del School District already has a similar policy in place and the administration believes it works.

"They're willing to drug test because they don't have anything to hide," said Katherine Hughes, assistant Superintendent of Mid-Del Schools. "It's been a good proponent of prevention."

Hear what Edmond parents and students think about the possibility of drug testing.

Drug tests are a possibility for all Mid-Del High School students involved in extracurricular activities. The district receives $150,000 a year in Federal grant money to pay for the program.

"I think it gives our students a really good excuse to not make a poor decision," said Mid-Del Drug Testing Coordinator Jackie Castleberry

District officials believe the tests themselves are a deterrent and, they say overall, parents support them.

"Our main goal is for that child to get help and for the parent to become aware that their child is experimenting," Castleberry said.

Not everyone stands behind random drug testing.

"We just don't think it's something that adequately addresses the problem," said Chuck Thorton of the ACLU.

Thorton opposes drug testing in schools. He especially finds fault in what the Edmond School district is trying to do. They want to randomly test students in extracurricular activities and those who have a permit to park on campus.

"I'll grant you it's a differently twist on things but again, we're concerned that the rights of parents are being eroded at a very steady rate and this is just not something we need to do," Thorton said.

At Mid Del Schools, they applaud other districts, like Edmond, for considering drug testing.

The Mid Del School district is part of a national research project. The U.S. Department of Education will look at its results along with 10 other districts across the country to determine if testing prevents drug use.