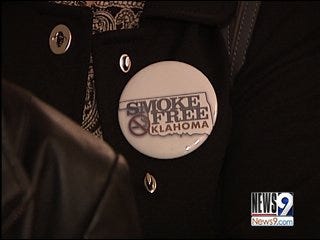 OKLAHOMA CITY -- Proposed legislation making all restaurants and bars in Oklahoma completely smoke-free appears to have been snuffed out for this session, despite the efforts of about a hundred volunteer lobbyists Tuesday at the Capitol.

The goal for volunteers was to visit each legislator to deliver their message about making Oklahoma a healthier place for everyone.

"I believe four for five years ago we passed a bill that allowed separate rooms, separate facilities, and so I've been concerned about the restaurants who've made that investment," Senator Mike Johnson (R-District 22) said.

It was not the response volunteers were hoping for.

"It is hard when we kind of get met with some less-than receptive reaction, but we're committed in this fight," cancer survivor Tammy Padgett said.

One lawmaker, John Trebilcock (R-Broken Arrow) listened to their concerns.

Representative Trebilcock chairs the committee the smoke-free workplace bill was assigned to and was the last chance for it to be heard, but ultimately Trebilcock said no.

"To me, this is a private property issue," Representative Trebilcock said. "People own restaurants, they own bars. People can vote with their feet, so to speak, and they can patronize establishment that don't have smoking."

Despite the setback, the group stayed focused on educating lawmakers about the health benefits of going smoke-free, which they say is happening everywhere.

"We have 29 state, we have cities in all the other states that are going smoke-free," said Pat Marshall of the American Cancer Society. "Countries have gone smoke-free."

They claimed polls show Oklahomans want the same and they believe, with a little more time and persistence, it will happen.

There is still a bill alive that would create a task force to study the potential impact of passing a smoke-free workplace bill in the future.