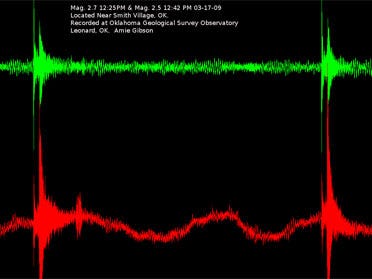 The United States Geological Survey reported a 2.4 magnitude earthquake at 3 p.m. south of Norman a couple of hours after two other minor quakes were reported near Del City.

There were no immediate reports of damage. A 2.5 to 3.0 magnitude quake is normally the smallest felt by humans.

Workers at nearby Tinker Air Force Base reported feeling the quake and noticed desks shaking during the noon quakes.

There have been 13 earthquakes in Oklahoma in the past six months, according to USGS records.

Researchers from Purdue University and Northwestern University say that seismic activity from the the midwestern New Madrid Seismic Zone is shifting to adjacent faults in the nation's midsection, including those in southern Illinois, Arkansas or Oklahoma.

Other scientists called those conclusions premature, in part because the study was based on a relatively narrow time period from the area that remains seismically active.

The Oklahoma Geological Survey is asking anyone who felt the quake to report them on their Web site at www.okgeosurvey1.gov.