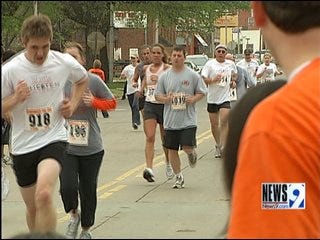 STILLWATER, Oklahoma -- Thousands from across the state gathered in Stillwater Saturday morning for the 3rd annual "Remember the Ten" run.

Oklahoma State University student Matt Fletcher covers his body with school spirit as a tradition before any big event, and it's why he's up so early on a Saturday morning.

"This is the only run like this I've ever done," Fletcher said.

Fletcher and others came to cheer on the more than 1,200 people who are running in this year's "Remember the Ten" run. The event honors and celebrates 10 lives lost in January 2001. That's when a plane crash in Colorado killed 10 members of the OSU men's basketball program.

"It is incredibly satisfying to know that the memory of the 10 will always continue," "Remember the Ten" founder Kerry Alexander said.

Also this year, members of the NEWS 9 family teamed up to remember a familiar face. Former sports director, Bill Teegins was on board that fatal flight back home.

"I hope we always remember the 10 because they were 10 special people," "Remember the 10" Honorary Chairman Eddie Sutton said.

In two years, the 5 and 10-K race has raised more than $40,000 for the school's counseling center. This year's race will only add to that amount, and organizers say based on the increasing interest and turnout it's an event that will be around for some time.

"This is going to be an annual event, not just for this year or the next couple of years," Alexander said. "We'll be around for the next 20, 30, 40 years going forward."

Learn more about the Remember the Ten race and lives of the men who are remembered.